When Titus Took The Train 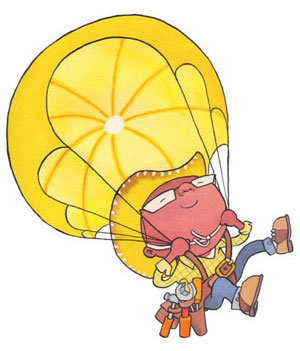 Titus is going on a long train journey. Under the watchful eye of the train guard he takes his seat and, until he arrives at his destination where Uncle Henry is waiting to meet him, he doesn't leave it. Or does he?

Is it the curly moustache of a fellow passenger that is the impetus for Titus' fisticuff fight with bandits on the train roof? Or the sharp metallic teeth of the guard's ticket-puncher that propels him into a dangerous tunnel encounter with a T-rex? Is it the fact that the train makes a routine stop on a viaduct that sends Titus spinning into a daredevil parachute jump to find a mechanic and fix the stricken engine? Or is it the announcement that ‘Boulder City’ is the next stop that creates an avalanche of activity where Titus saves the train from a catastrophic collision with falling rocks?

Readers will be swept along by these acts of derring-do and will be left wondering whether they really did happen or whether they're all part of the wild parallel universe that is Titus's imagination.

Find out how Anne and Sarah made this video